I was going to post about Twitter4Canvas today, and I might still have time to do that, but I wanted to write up something today about Inoreader and how it helps me make sure everything is going as planned in my classes with the students commenting on each other’s blogs, which they did this weekend.

Here’s how it works: For each student’s blog, I subscribe to their blog post feed AND to their blog comment feed (that is one of my requirements: they can use any blog platform they want so long as it is ad-free and has separate full feeds for posts and for comments). That means I end up with a folder in Inoreader that contains all the comment feeds, and I name each feed for each person whose blog the feed comes from, with a two letter prefix for the class.

Then, after the first round of comments (which is sometimes kind of chaotic because of add/drop), I can quickly click through the subscriptions in that folder to make sure everybody has at least two comments, and hopefully four. Some people might have even more than that if I have also left some comments (which I do when I have time). Here’s a screenshot that shows how the interface looks. This student in Myth-Folklore (MF) has gotten five comments, so that’s good! (I could read the comments too if I wanted, but I’m honestly just checking for numbers of comments today.)

So, it takes literally just a couple of minutes to click on through all the students (I have anywhere from 80 to 90 in any given semester, both classes combined), making sure that despite the chaos of add/drop, things look good.

I rely on the power of random for the blog comments, and as the semester goes along, students will sometimes have four comments each week, sometimes just two, and possibly none (it’s rare, but it happens), and at the same time, they also understand why it’s unpredictable. Some weeks they themselves might skip the blog commenting assignment, and so it’s a kind of lesson in comment karma. Overall, the goal is for everyone to do the commenting assignment every week and for every person to get four comments… and on average, that is mostly how it works out, with a little fluctuation from week to week. When I set up the blog comment groups for Week 2 later this week, I’ll write up a post here to explain exactly how that works; the power of random minimizes the time I spend in creating the groups, while maximizing the spread of comments throughout the class as a whole.

Meanwhile, though, I am really glad that Inoreader makes it easy for me to check on the comments during Week 1. It’s important that everybody feel included in the class during the first week, and both giving and getting comments is part of how that works. And it worked pretty well this week I think!

How is this relevant to Canvas? It’s relevant because there is nothing in Canvas that helps to check on levels of engagement in a class like this. Blogs, by having a person-based stream which in turn collects comments, lends itself to this type of inspection. Especially because I teach fully online classes, I need to be able to see that things are going well, checking on each and every student as the semester gets started, just to make sure! That’s why I am glad I have Inoreader; it works for me. 🙂

Connecting with others: it’s important both for life and for learning.

Connect with others to reduce stress. 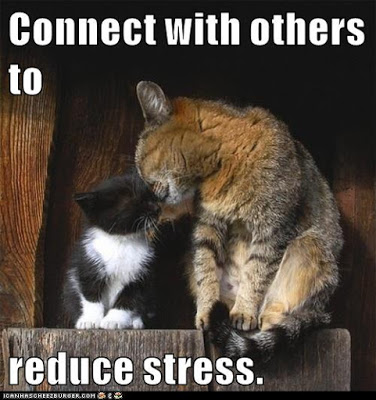