So, I’m still kind of in shock at this nothing-but-numbers approach to grading in Canvas (see yesterday’s post). To make sure I understand things correctly I re-read this archived/failed feature request: Allow Grading Schemes where Range is based on points not percentage. The commenters note that this problem is part of a more general failure in Canvas: the lack of variability in setting grading schemes. That conversation led me to another archived/failed request: Can’t a letter grade just be a letter grade? And as I follow this White Rabbit through the various twists and turns, I see that this is a long-standing — very long-standing — problem with Canvas.

The conversation at Can’t a letter grade just be a letter grade? expresses many of my same concerns about the tyranny of percentages and number-grading only: even if you set up a scheme that assigns letters, “you cannot hide the number grade” as one commenter points out, and this concern was echoed by others.

As for it being a long-standing problem, consider this comment: “Consistently since 2011, our faculty have been seeking a way to decouple letter grades from Grading Schemes and to import certain grades via .CSV only as letter grades.” That commenter provides links to a half-dozen previous attempts to request that Canvas do something about this; they go back to a previous community forum that Canvas ran in the past, so unfortunately those conversations have been lost, but you can get a sense of what they were like from the titles:

In the current Canvas Jive forum, the idea comes back again here: Allow final grade to be letter grade only and here Grades without points. And who knows: perhaps there are other instances. That is one disadvantage of the free-for-all approach to feature requests; apparently there’s not a good system for helping people explore past requests before making a new one.

Meanwhile, again and again the commenters point out the bureaucratic problems the numbers-only grading creates for them and also the way it confuses and even upsets their students. The specific details depend on the different approaches people are taking, if they curve, if they use rubrics, etc. The main takeaway is that for many different kinds of grading approaches, this Canvas limitation is a serious problem.

This general statement by one commenter sums it up pretty nicely: “Instructors simply want a “decoupled” alphanumeric column in their gradebooks that they can type just type letters into for purposes of final grades, and import of those grades into the SIS.”

One person facing exactly the same problem that I face uses the same (ridiculous) workaround is apparently my only choice: “The only way I can report this information in the gradebook is to create a new assignment. Then Canvas reports the letter grade that I enter along with a numeric score that it makes up. (I’ve attached two screenshots–one in which the letter grade “assignment” was worth 1 point, one in which it was worth 0 points.) The numeric score is meaningless. It would be a lot less confusing if the gradebook just showed the letter grade without any numbers attached.”

Entering meaningless numbers simply in order to generate the display of a letter grade is exactly what I refuse to do.

I have a lot to say about this myself, which I will save for a separate post later today. For now, I will let this post stand for now as documentation of the discussion trail at Canvas.

And as soon as I finish my follow-up post, I will begin the process of resubmitting this request, and I will contact every interested person I can find in order to see if we can (finally) manage to do something about it.

Maybe I will fail, like those before me, but I have to at least try:

I can accept failure; I can’t accept NOT trying. 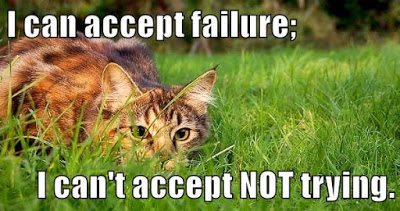