Normally I would have started classes one week early, which would be on Monday, January 9… but it was a “snow day” in Norman and campus was closed. Here’s a tweet from OU Libraries: 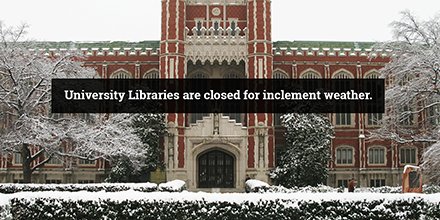 So, I figured I would see if there were any snowbound students who were interested in getting a head start on the semester, and sure enough: five students have logged on and gotten started, and there are even some blogs up and running! You can see a live stream of their first blog post assignment: Favorite Place(s). This screenshot shows the post as of 5PM on Friday… and the live stream link (powered by the mighty Inoreader) will show the new posts automatically. I’ll say more about that in a later post. 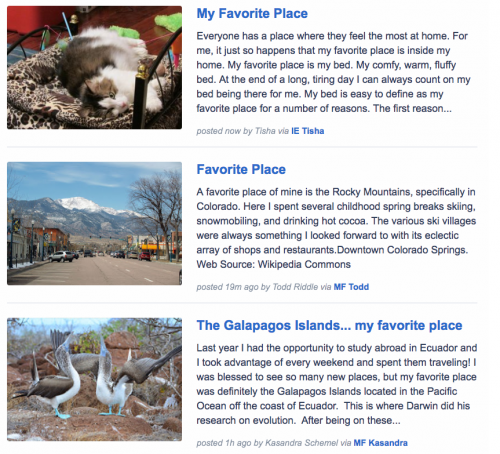 The students’ blogs are the most important part of the class, and the Favorite Place(s) is a fun way to get started, making sure they feel comfortable including images in their posts. Most students have not blogged before, and this post is a good way to get started, with the focus really on sharing something that is personal but not getting into introduction mode yet (the intro post comes a bit later in the week, after they’ve had some more practice blogging).

Meanwhile, about Canvas, the only thing I can say is that… there is nothing to say! As the students do the assignments, they do “Declarations” to take their points, and it’s all working exactly as it should, with no questions from the students at all. Which is great! I then see those points show up in the Gradebook automatically; in this class, for example, there are 2 students who have started, and one student has already finished 5 of the Orientation week assignments. With 46 students in one class and 48 in the other, the Gradebook is going to get very busy very soon, even though it is quiet right now. 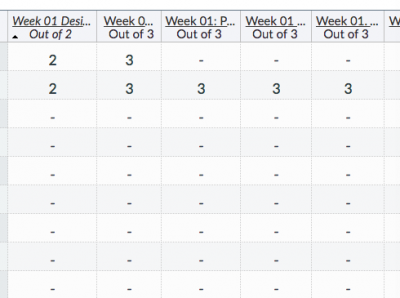 So, a snow day, a slow start… everything is looking good at the end of this Friday, and I am excited to see what next week will bring!

Instead of a growth cat, I thought I would post a Latin cat … in honor of the snow! 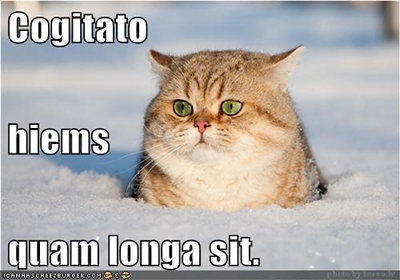