I am really enjoying this Twitter4Canvas project: it’s a way to bring the power of the live Internet INSIDE the otherwise static LMS, and it’s also a way for me to think more closely about why I like Twitter so much as a space for learning. In this post, I want to write about the power of hashtags, looking at both their advantages and disadvantages.

The widget I created today for #DressLikeAWoman documents a provocative hashtag event. I don’t know who first used the hashtag, but it happened quickly, and I found so many funny, thought-provoking, and important tweets in the stream. I think it’s a fantastic example of a Twitter response to a political event, self-organizing and self-sustaining. I’m not sure how long it will last, but I will be watching, and having the widget is a good reminder to me about checking in to see how it’s going. 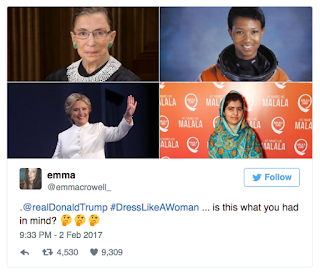 Even better, it seems so far to be free of trolling. One of the perils of open expression at Twitter is the way that trolls can take over a hashtag. That hadn’t happened when I scrolled through the stream just now, which makes it even better. If people object to something, I think they should create their own hashtag, not try to take over an existing hashtag. So far, so good!

Of course, even if trolls do invade a hashtag, that is a teachable moment of its own. So, in terms of how you might use Twitter for a class, it really depends on what you are looking to offer your students:

Hashtag. The hashtag gives you an unfiltered live conversation, with its ups and downs, and even with its trolls. For classes where the conversation medium is itself an object of study, like in a social science class or a journalism class, then looking at the unfiltered hashtag is probably a good option.

Curated Stream. If you don’t want the whole hashtag stream, you can use the hashtag to create a curated stream; to retweet is to curate. This is the main way I use Twitter for my classes. I have a dedicated account for my classes, OnlineMythIndia, and I retweet what I want to share with my students. I follow accounts and I follow hashtags in order to find good stuff to share.

Viral v. local hashtags. Of course, you can also have local, small-scale hashtags, unique hashtags that you yourself are promoting for a specific purpose, like the way hashtags are used for a Twitter chat or for a class. You don’t technically have control of them, but when they are local hashtags, you’re not as likely to see trolling or spamming.

For example, I’m having a lot of fun with the Digital Alchemy: Networked Narratives class right now, and members of the class are using the hashtag #NetNarr to connect. Plus, there is also a curated account by the class organizers @NetNarr. At least for me, Twitter is the glue that holds that class together, and I have already made some new online friends as a result of our Twitter connections. 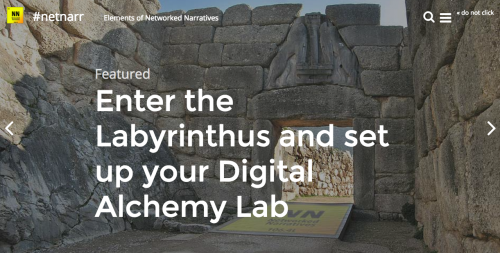 HumanMOOC. And here’s something ironic: I first started thinking about Twitter widgets in Canvas during a winter break two years ago (December 2015 / January 2016) when I participated in HumanMOOC. We didn’t have Canvas yet at my school, so one of my reasons for wanting to participate in HumanMOOC was to learn about how they were using Canvas as a learning space. I experienced a lot of frustration with Canvas then (you can read my blog posts here), but I really enjoyed the very lively Twitter stream associated with the course. At the time, I had suggested that the course organizers put a Twitter stream inside Canvas; that was before I even knew about the poor quality of the Canvas Twitter app. As it turned out, the organizers of the course decided not to put Twitter inside the Canvas space because their goal was to protect the Canvas users from the unpredictable Internet; their design model required that Canvas be completely controlled by the instructors, as opposed to the spontaneous sharing at Twitter.

If I had known then what I know now, I would have urged them to create a curated stream in order to smooth out the hashtag chaos, and then to create a real Twitter widget in order to share all the tweets with images and video coming from that curated stream. I think that a Twitter stream curated by the instructors would have fit their requirement for total teacher control, while bringing some of the lively interactions from Twitter into the Canvas space (although that’s just a guess; I definitely did not get the point of separating the class into two cohorts divided by an LMS wall).

Meanwhile, I have learned a lot about Canvas and Twitter in the past year, very useful stuff that has led me to the Twitter4Canvas project. And of course the growth mindset cat asks… What can I learn next?

Whatever it is, I will bring back and share here. 🙂 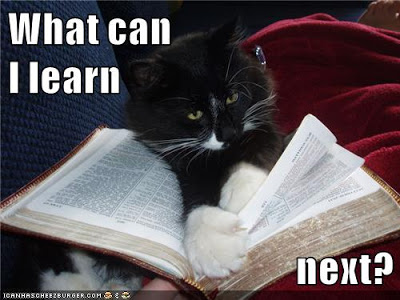