The main way that I use Twitter is to create a class content stream for my classes, which you can see here: @OnlineMythIndia. That Twitter stream then shows up via the widget in my Canvas homepage, which is why this post is part of my new Twitter4Canvas project. 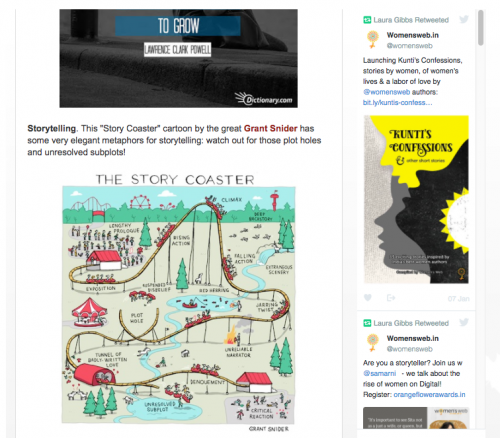 If you scroll on down through the tweets, you’ll see that it is a mixture of university-related announcements, motivational content, and also course-specific content about stories from India and around the world. I’ll say more below about just how I find the content that I use. Almost all the content is retweeted; I do very little original tweeting for this account.

One of the best things is being able to follow authors that we read in my India class like Samhita Arni, Devdutt Pattanaik, Chitra Divakaruni, and Usha Narayanan. It’s so exciting to be able to talk with these authors at Twitter, and some of my students have interacted with them at Twitter also! Writing this post prompted me to check in with Samhita Arni, for example, and we just now had a fun back-and-forth; I got to meet her Donald-Trump-look-alike cat, Zen, who is a card-carrying, book-wielding communist — that is the fun and spontaneous sharing that Twitter makes possible: 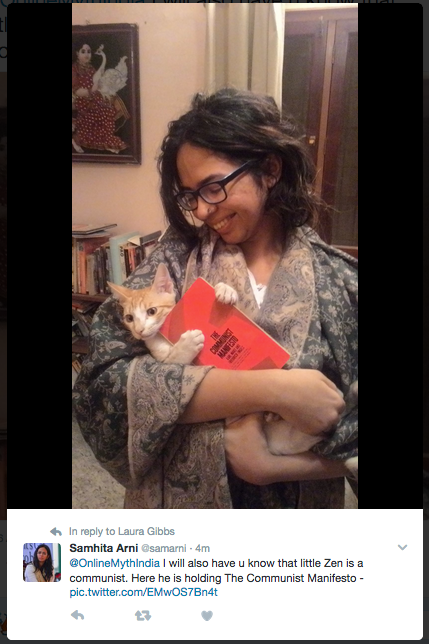 What is especially nice for me is that I am able to use the same stream for both classes that I teach: Myth-Folklore and Indian Epics. There is enough overlap between the two classes that it makes sense to have just one stream, hence my Twitter handle, @OnlineMythIndia, which parallels the handle I use for my personal/professional Twitter account, @OnlineCrsLady.

I started using Twitter in this way back in 2014, and it was my first really successful use of Twitter. I’d had a Twitter account since 2007, and I used Twitter sporadically, but never in a sustained way. Using Twitter for my classes, though, was great: it was so useful and so interesting that it led me to check in at Twitter several times a day every day, and as a result of that my own personal and professional use of Twitter has taken shape as well, but it really began with using Twitter for my classes. As a result, Twitter has become a big part of my own learning every single day. Google+ is where I have conversations with colleagues, but for sheer awareness of “stuff” (books, blogs, art, music, movies, education, politics, etc.), Twitter is now an important part of my online learning life.

What I’ve done below is to list the “top 5” strategies that have made this such an important part of my classes. Mutatis mutandis, some of these strategies might be useful for you too, and of course there are so many different ways in which teachers are using Twitter. If you have useful strategies and tips, please share them in the comments at this post, or tweet them with the hashtag #Twitter4Canvas — and of course you don’t need to be using CanvasLMS to brainstorm together about using Twitter! 🙂

Use a “must-read” list (or lists) to focus your Twitter attention. I’ve followed more accounts than I can really keep up with, but I have a “must-read” list for my Myth class and a “must-read” list for my India class, and I get almost all of my content by reading those lists. Lists are great: you can quickly add/remove accounts from any list, and there are no ads in the stream! I keep these lists private because I add/remove accounts from the list very freely, and I don’t want individuals to read too much into that; it’s very spontaneous based on my shifting interests from day to day and week to week.

Check in twice a day. I check Twitter whenever I have a few minutes to space and want a distraction, but some days I am really busy without a lot of time. On those days, I make sure to spend 10 minutes twice a day checking Twitter (5 minutes with each of my must-read lists). That’s not a big time commitment, and it is enough to keep the content fresh and moving. I don’t dream of trying to read everything posted by the accounts I follow; I treat Twitter like radio, and I tune in when I have time, listening to hear what’s playing.

Focus on tweets with media. To be honest, I rarely retweet an item unless it has an image or video included. My students are never required to read the Twitter stream; instead, I rely on it to grab their attention and excite their curiosity. For that, I need media content: enticing images or embedded video.

Model Twitter use for students. Many of my students have not used Twitter, and those who do use it are usually not using it for educational purposes, so I make sure to model my Twitter use for students, letting them know how much fun I have with Twitter and also how useful it is. When I am sharing something with the class that I learned about at Twitter, I make sure to say so. I recommend accounts to follow, either in general or based on specific interests. I provide Twitter Tech Tips for students who want to learn how to use Twitter. I also weave Twitter into class assignments where it’s relevant, like in the Wikipedia Trails option.

Use hashtags in addition to a class account. Just how you might use specific hashtags in addition to your class account(s) will vary, of course. For me, it is very helpful to have a unique hashtag for each of my two classes in addition to the joint account I use for both; the hashtags are #OU3043 and #OU4993 reflecting the course numbers. When I find a tweet that is especially relevant to either of those classes, I retweet using the Classic Retweet extension (such a great extension! it works like Twitter did back in the old days, with editable retweets) so that I can add that hashtag to my retweet. This allows me to include a class-specific Twitter widget in the websites for those classes, separate from my overall Twitter stream. You can see my Myth-Folklore hashtag widget in the sidebar of the Myth-Folklore UnTextbook blog (where my students do all their reading for class), and you can see the Indian Epics hashtag widget at the Indian Epics Reading Guides blog. I check every other day or so to make sure I’ve retweeted at least one item with each hashtag so that the hashtag widgets stay fresh. Using hashtags has its risks, of course, but I’ve never had any problems with spam, and sometimes students join in by using the class hashtags too, and I can in turn retweet their tweets through the class account.

Do you use Twitter to share with your classes? Have you found some good strategies? Please share in the comments! It took me a while to get the hang of using Twitter, but now I cannot imagine teaching without it, and I would really like to help spread the Twitter goodness while I also keep on learning new Twitter tricks myself. 🙂

Curiosity: the quest for new ideas and information. 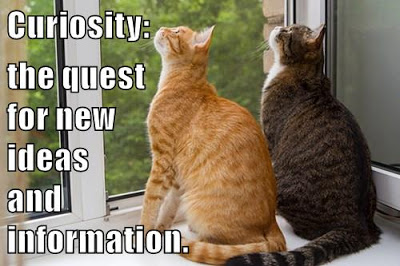